So far, the manufacturer's lineup is not too extensive. The main feature of these phones is their "binding" to social networks - Facebook, Twitter. By default, all necessary applications (including Skype) are installed, adapted to the modest capabilities of mobile phones. The user simply needs to enter their logins and passwords. These devices also “know” about other ways of communicating on the Web.

The first model, with the uncomplicated name iNQ1, appeared in February 2009 (the company itself appeared a year earlier). It was sold in packages of a cellular operator 3. When concluding a contract for a period of 2 years, the phone is given free of charge. This model has received a prestigious award Phone of the Year at the annual Mobile World Congress in Barcelona. 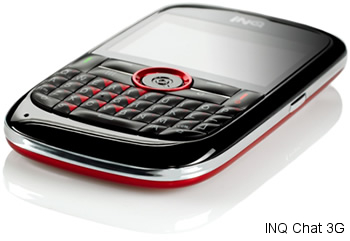 Later, more advanced models appeared, including those equipped with QWERTY keyboards. In the future, smartphones based on Google Android.

The company is confident that despite the presence on the market of "advanced" mobile phones, many users are interested in low-cost models that are easy to use and easy to communicate.

Headquarters INQ located in London, UK (London, UK). There are also representations in other countries.