By its appearance, beer Kwispelbier owes to a dog named Cody from the Dutch town of Zelhem (Zelhem, The Nederlands), who was very fond of beer (regular). As a result, the owner of an alcoholic dog came up with the idea that it would be nice to create a special beer in order to please other dogs. History is silent about how much time was spent and how many experiments were performed. It is only known that the same Cody acted as a tester. After achieving the desired result, an agreement was concluded with a Dutch brewery Scheldebrouwerij (Sheldebrow assure). Again, Cody became the logo of the new beer brand. 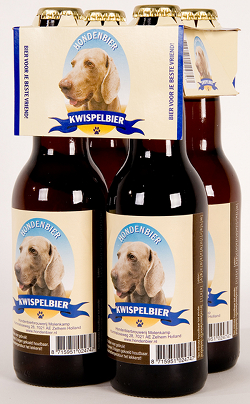 By the way, in a word "quispel" The Dutch call tail wagging when the dog is content. Dog beer is more expensive than most regular beers, but is that going to stop real dog lovers? It is also offered to purchase special glasses with the brand logo, from which it will be more convenient for dogs to lap.

Kwispelbier is by no means a unique phenomenon. Similar drinks are produced in other countries. Of those that are richer. For example, in Germany, Schwanzwedler Hundebier.