Finnish manufacturer of locks of various types, both electronic and mechanical. In addition to locking systems, various related products and other hardware products are produced.

The history of ABLOY goes back over 100 years. It has its origins in 1907. It was then that Emil Henriksson, a mechanic and office equipment repairman who lived in Helsinki, while repairing a cash register, realized that based on its complex structure, consisting of a set of cylinders and disks, it was possible to construct an excellent lock. Emil's hands grew from the right place and very little time passed from the idea to its practical implementation. Realizing that you can make good money on this, a talented mechanic abandoned his main job and founded a company with a cumbersome name. Ab Lasfabriken – Lukkotehdas Oy. However, soon after receiving a patent, it was replaced by a shorter one - Ab Lukko Oy. And in 1920 the brand was born ABLOY, which is an abbreviation for the company name. 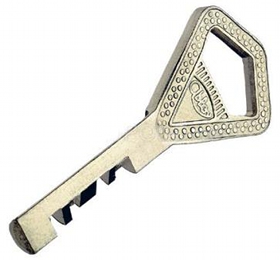 The company did not remain independent for long - in 1923 it was acquired by Kone and Silta Oy, a Finnish metalworking company best known for its military products ranging from helmets to submarines. However, in 1936 and Kone and Silta falls victim to a takeover by being taken over by an engineering company Wartsila Oy, with education Wartsila Group.

First international order Ab Lukko Oy entered in 1924 from Denmark. And four years later, the first company store was opened in Helsinki, in which, in addition to locks, various hardware products were also sold (by 1950, a network of such stores already covered the whole of Finland).

1990 was marked by the renaming of the company to Abloy Oy. It still exists under this name. Its headquarters is located in the city of Joensuu, Finland (Joensuu, Suomi). Since 1994 the company has been part of the Swedish Assa Abloy Group, which is now the world's leading manufacturer of locking systems.