Slogan: The worls´s best science and medicine on your desktop

A large international publishing house specializing exclusively in the publication of scientific journals. Part of an extensive publishing group Macmillan Publishers Ltd, founded in the UK back in 1843 and, in turn, is part of the company Verlagsgruppe Georg von Holtzbrinck GmbH. 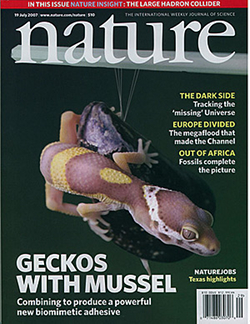 The most famous magazine published NPG is actually himself nature (Nature: a weekly journal of science) - "flagship", published since November 4, 1869. It is one of the oldest and most respected scientific journals. Articles devoted to exceptionally significant scientific research and discoveries are regularly published on its pages.

However, although Macmillan Publishers Ltd and magazine nature and exist since the middle of the 19th century, NPG, as a separate division, was allocated quite recently - in 1999. This separation was made in connection with the expansion of the brand Nature and the emergence of many specialized magazines (which have already been mentioned above), such as Nature Materials, Nature Cell Biology, Nature Photonics and the like.

Website nature.com, also owned NPG, is one of the most visited scientific resources on the Internet (the number of visits exceeds tens of millions per month).

The publishing house is headquartered in London, United Kingdom. Representations are scattered all over the world: USA, France, Germany, Japan, China, Australia…